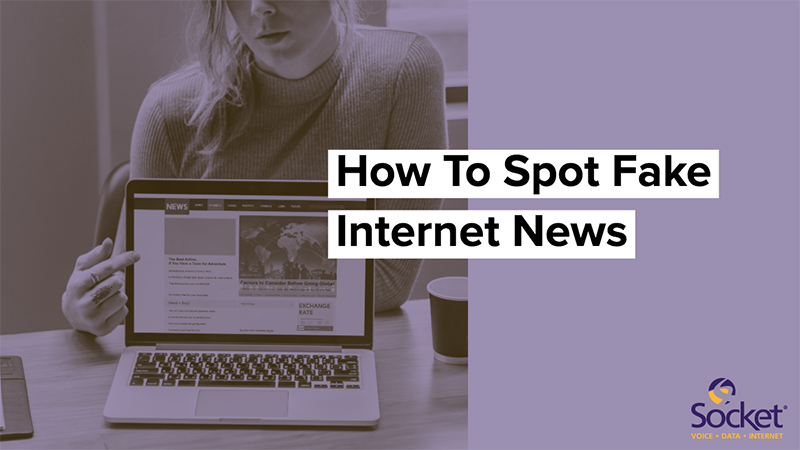 The “fake news” has been spreading like wildfire, but deciphering what’s real and what’s fake can be hard if you don’t know the clues. Often times we share stories on social media, spreading false information that could be harmful for everyone. Although sites like Facebook have worked to limit the amount of fake news since the 2016 Presidential election, they’re still prevalent all over the web. According to a recent Pew Research survey, 50% of Americans see the spread of false news as a “big issue.”

One of the main reasons fake news is dangerous is people often believe it. Just because your closest friend shared a story, doesn’t mean it’s true. While you’re reading an article, blog, post, etc., keep in mind these ways to spot fake internet news:

Journalists are inquisitive and always questioning what they're told and what they read. You should do the same thing. If something doesn’t make sense, research it further. When researching, look for websites that end in “.gov” or even “.edu.” Those are going to be your most trustworthy sites for information. You can also take advantage of tools such as Google Scholar, which is a free database of scholarly research. Basically, journalists don’t believe everything they see on the internet.

The article’s source has a big hand in determining the validity of the story. Did it come from a verified news source like the Associated Press or is it on some sketchy blog? The website’s credibility is key. CBS offers a great list of websites that are known to have fake news if you need help getting started.

You don’t have to depend on news sites to do fact checking; you can do it yourself. If a story claims something to be true, see if other sites are saying the same thing. You can even use websites like FactCheck.org to help you out. Look at the quotes and where information is coming from. If it’s from something like Wikipedia, that’s definitely a red flag.

Don’t fall for the “click-bait” trap.

To get your attention, some articles use outlandish and provocative headlines. The goal could be to stir anger and conversation. But beware, sometimes these headlines take the facts out of context or they’re just straight wrong. When sharing posts, don’t just read the headline, read the whole article to gauge if it’s true or not.

Look out for your own biases.

We often lean toward news that seemingly validates our own thoughts and beliefs, even if that news isn’t true. This can also coincide with the idea that we live in an “echo chamber,” meaning, we tend to surround ourselves in a bubble that only exposes us to people who support our opinions and beliefs. To avoid that confirmation bias, make sure you understand what your biases are, and try to ignore them as you scroll through articles.